A guildmate reminded me this blog existed, so I thought I would share a pic of the most popular pet I have ever had: Book. 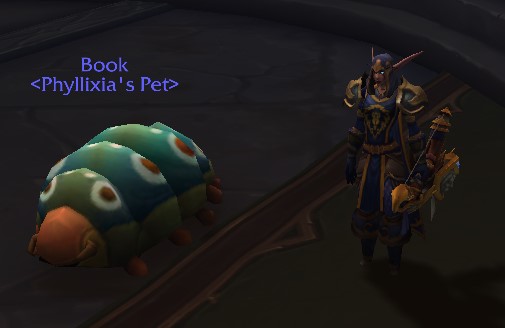 For some reason, this unassuming worm receives quite a lot of attention from strangers and guildmates alike, which completely surprised me at first - but I guess unlike the more popular pretty ponies and cats, most hunters don't immediately think of taming worms.

My transmogs often get random whispers too, especially as I don't use a particular "set", but rather piece together my own outfit.
It just goes to show - sometimes you stand out a lot more when you do something different!
(Also... Book just *is* cute)
Posted by Phyllixia at 10:54 PM 1 comments
Labels: fun, hunter, pet

Despite the length of time between this post and the last, I have actually been playing WoW fairly consistently the entire time.

I just don't have anywhere near the amount of time I used to have to write a blog post (or, in fact, the inclination - considering there are now many places to get the small tips I used to post, in a more efficient way and in a central location).

To that end, I've updated my go-to hunter links on the right hand side of the page for anyone who happens to come across this blog (who on earth are you people?!), so you will hopefully find what you are looking for.

If you happen to be here to see what the hell I've been up to all this time, well... a lot! I've changed guilds (again), tamed a stupid number of pets (anyone else's favourite part of the expansion the 200-slot stables?) and signed up with a bunch of vampires... and that's not counting the fact that I skipped posting anything to this blog for almost the entire of Legion (has it really been three and a half years?!).

I can't promise to post more frequently or keep anything on this page updated, but if you're looking to chat or learn2hunter, I'm happy to answer in-game mail (Phyllixia-Khaz'goroth). Otherwise, you never know.... I may pop up here again at some point if I feel the need to be creative!

Eyeball Tier is Back in Fashion 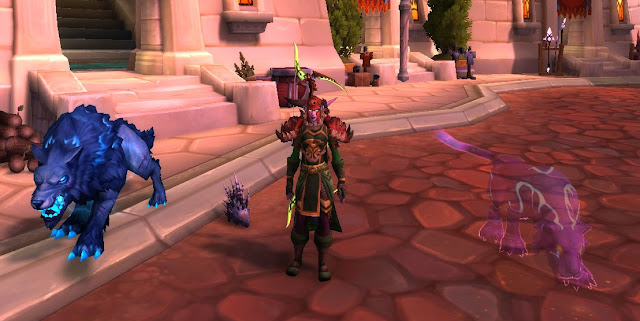 Did I come out of blogger hiding - where I've been for over a year, apparently... how times flies! - just to post about the new and improved eyeball helm and shoulders?

Yes, yes I did. Anyone else miss freaking their raid out with Gronnstalker's and Season 3 armour sets?
Posted by Phyllixia at 1:19 AM 0 comments
Labels: gear, hunter

I've only just realised it has been months since I've posted an update here... oops.

Well, at least I haven't exactly been idle....

It's been a devil of a time getting 666 unique pets to max and rare level (they are actually all at max, in case you're wondering about the discrepancy between 650 and 666 - some pets don't have a level because you can't battle with them, like the humans). Beast master hoooooooo!

If you're wondering how I managed not to get bored levelling them all up, let's just say that A) all of my random bank alts hang out 24/7 with various pet masters around Azeroth; B) pet battle week is frickin' awesome; and C) the Mechanical Pandaren Dragonling is a total MVP. Also, it helps that I absolutely love Warcraft 2 music - I started my Warcraft obsession there and the fact that pet battles use that music makes it a lot more fun :)

Next task: make a concerted effort to hunt for the rare tames that I still don't have. Hopefully there won't be too many people camping...
Posted by Phyllixia at 11:03 AM 1 comments
Labels: achievements, pet battle

Gladiator, Are You Ready?

Now that my guild is regularly clearing Heroic Archimonde and I don't need to spend time in dodgy PuGs to get my kill for the week, I've finally made the move to a Gladiator's Sanctum, with the aim to get some PvP achievements - particularly in Ashran, which will likely be deserted as soon as the next expansion hits. 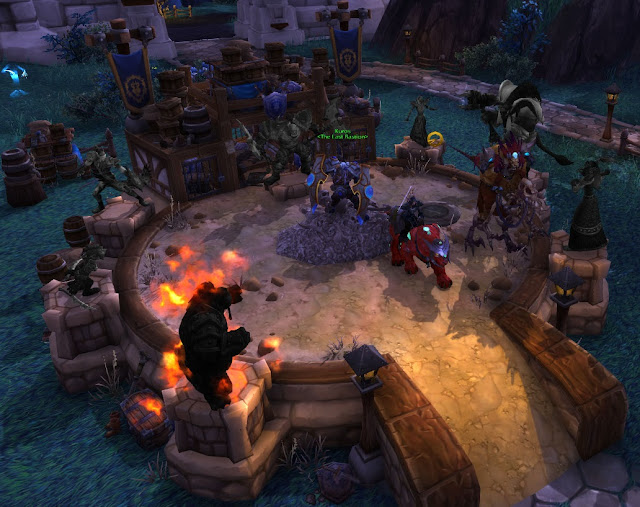 It's been awhile since I've PvPed properly and not only is my gear behind, but also my knowledge of any strategy to beating opponents 1v1. Luckily in Ashran that doesn't happen much, although I also have no clue what I'm doing in there besides following the mob and killing anything in the way.

I am, however, happy that I haven't completely lost my PvP cunning - I managed to get both the Darkmoon Faire and Gurubashi Arena heirlooms by biding my time and letting the frontrunners use all their cooldowns on each other before ganking them. 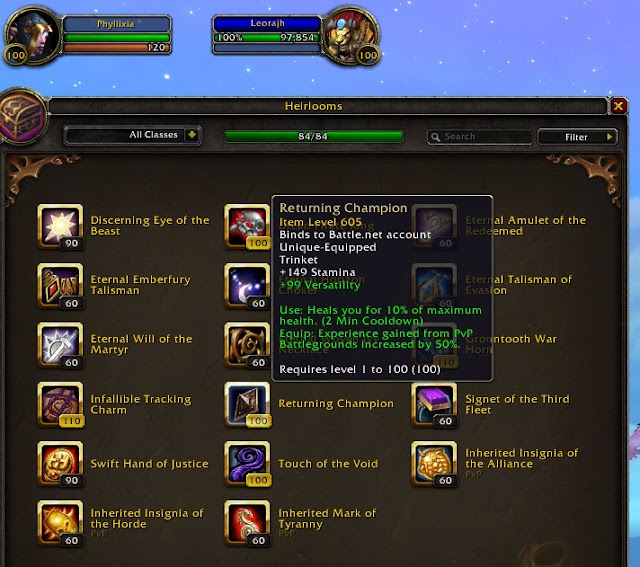 Not that I particularly care about heirlooms, considering the only PvP I do on my alts is in the world on a PvP server... but it's nice to have bragging rights to those! 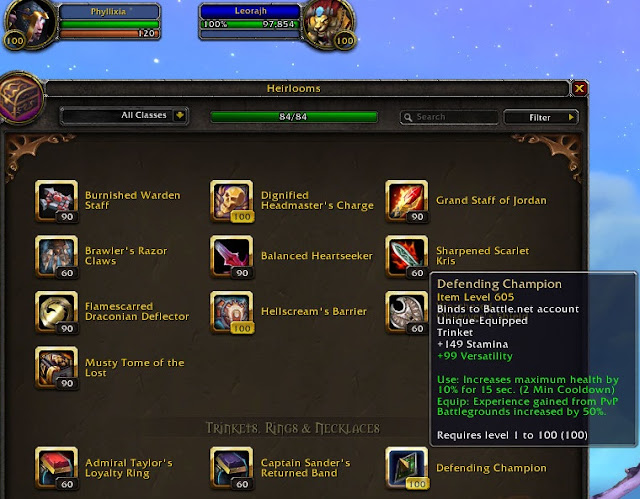 Now all I have to do is figure out how to get all the Ashran and Gladiator's Sanctum achievements... ideally I'd want to get them done before the next expansion and then go back to using the Lunarfall Inn... I realise it will take me about 2 years (not an exaggeration!) to get *every* follower from there... but I can't help myself!
Posted by Phyllixia at 12:30 AM 1 comments
Labels: achievements, garrison, PvP 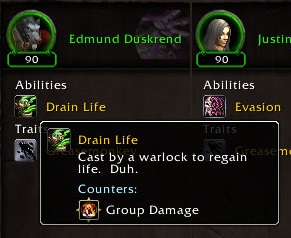 Anyone else spend a whole lot of time with Defender Illona dead?

This follower has got to be the most frustrating one to level up, particularly as she has the tendency to kill herself:

Sure, I may have killed Arachnis a little close for splash damage, but when my pet gets into combat with it I can always call it back... I didn't even have time to *think* about the fact that you can't call Illona back before she died.

It's a good thing this is my last bodyguard not at max level... if I had tried levelling her with a lower ilvl she would have died a lot more!
Posted by Phyllixia at 1:15 AM 0 comments
Labels: fun, garrison, miscellaneous 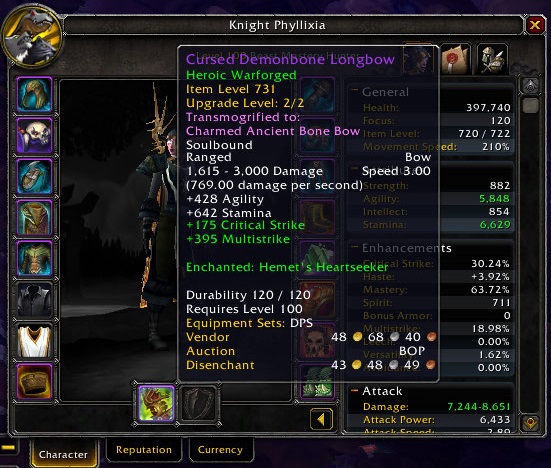 Also, eat this, Raid Leaders who kicked me from 2 different elitist Heroic Arch PuGs on pre-execute wipes because my DPS was low:

Won't have an excuse to kick me now!

(For the record, I did 53k before we wiped at the start of Killshot range using my old bow and got kicked before I joined the Mannoroth PuG. Blessing in disguise?)
Posted by Phyllixia at 10:06 PM 0 comments
Labels: gear, hunter, PuG, raiding

Today's Legion hunter class preview has a lot of hunters excited for the upcoming changes to the 3 specs in the next expansion.

As always, I've only skimmed the changes - I tend to like getting the feel for new spells and talents only when I'm on the PTR or live servers rather than reading previews - but one thing I'm happy about is the connection the specs have to lore.

Anybody who has been reading my blog for awhile would know my original connection to the old WC3 dark ranger, so Marksman is sounding better and better all the time. I'll definitely be happy to see the last of Sniper Training; being mobile is probably the main reason the classes I'm most comfortable playing are the hit-and-run hunter and resto druid.

Survival is sounding interesting as well, although it's not a spec I'd be playing much, being fully melee. Potentially something I'd pull out for world PvE and soloing ventures, particularly if Harpoon turns out to be as fun as it sounds. I'm anticipating a lot of "clever use of game mechanics" type shenanigans going on with that one!

I would have liked a bit more info on the pet-hunter interaction for Beast Mastery - the spells don't stand out to me right now (apart from the thought of having every pet in your stables coming out to help you, which would be frickin' awesome).

Also, whilst I agree that Survival having a monopoly on traps is mostly fine, I actually think it makes more sense for BM to get Snake Trap. I mean, really, if you're going to carry around and throw down a cage of snakes at someone and have them strike at your enemy with precision, surely you need to have some kind of bond with them?!
Posted by Phyllixia at 12:16 AM 0 comments
Labels: beta, gear, hunter, lore, pet, spells, talents

If At First You Don't Succeed

...make sure you have enough gold for repair bills.

After running 6 PuGs this week with varying numbers of idiots, incompetents and elitists to get this kill on the board, I was so relieved to finally get a winning combo that I didn't even care that I (once again) didn't get loot.

Honestly, it's quite disheartening when someone /ignores you because you dared to whisper them after being kicked that it wasn't your fault that someone else's chains killed you and you couldn't kill shadows whist dead (this was after a single wipe and I already had points against me because a) I was BM and not MM; and b) I didn't have AotC).

Luckily not all the groups were that toxic, otherwise I'd have given up earlier. There were also good-natured but ultimately bound to fail groups:

...and it even got to the point where I was "that guy" and left a raid after one wipe because I just knew they wouldn't be able to get a kill (I was right; they were still in the LFG tool hours later).

Yes, this week was a complete nightmare of PuGs, but on the upside I did manage to scrape through with the all-important achievement to link for next week.

Now that I can breathe a little easier on that front, I plan to start practicing MM a little. I don't know whether I'll be able to get better DPS out of it given my tendency to move randomly whilst raiding (thus ruining Sniper Training and cancelling out any advantage MM is supposed to have from the 4set this tier), but I'm willing to at least give it a go - even I have to admit that the last phase of Archimonde is incredibly pet-unfriendly!
Posted by Phyllixia at 11:14 PM 0 comments
Labels: achievements, gear, hunter, pet, PuG, raiding, talents
Older Posts Home
Subscribe to: Posts (Atom) 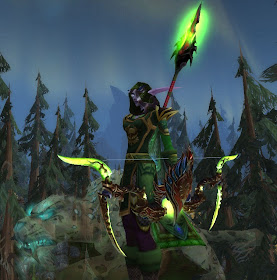 Hunters Rhok comes to you from the mind of Phyllixia, a hunter in Blizzard's World of Warcraft. The name of the blog originates from a catchphrase invented at a time when only the most skilled hunters could obtain Rhok'delar, Longbow of the Ancient Keepers:
"Hunters don't just rock, we RHOK!"